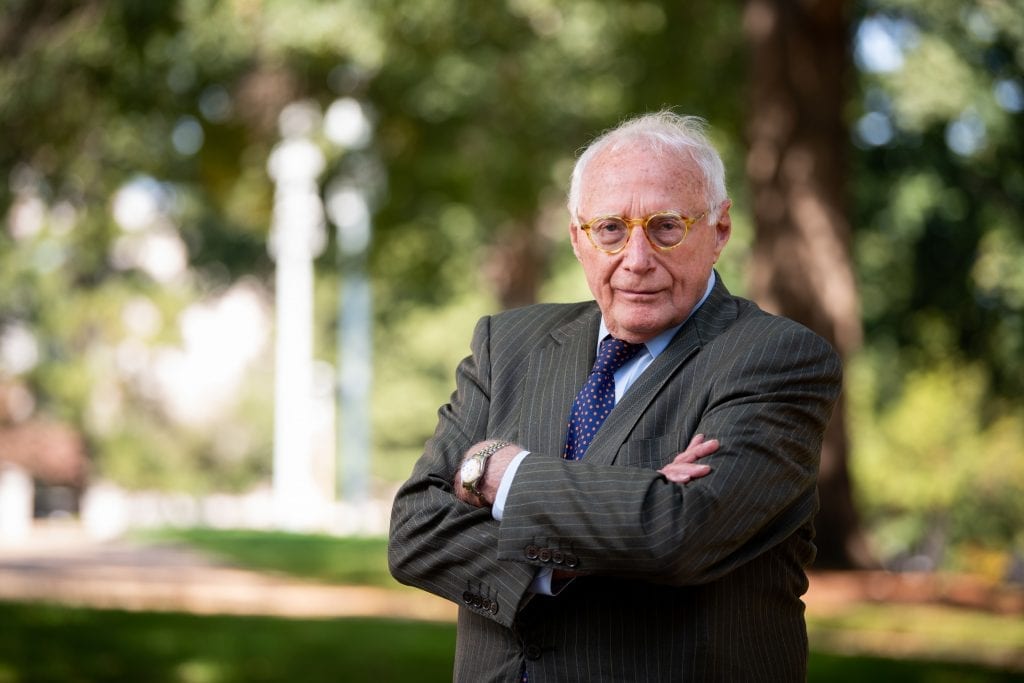 The North Carolina Bar Association established in the spring of 2008 the annual Wade M. Smith award “for a Criminal Defense Attorney Who Exemplifies the Highest Ideals of the Profession.”

Wade Smith has been one of North Carolina’s best known and most acclaimed lawyers for nearly 50 years. His trials are recounted in books, magazines and journals. A renowned storyteller, Wade insists that within each case there is a compelling story waiting to be told. In seminars and bar meetings Wade has shared the art of storytelling. His cases offer a fine collection of North Carolina Courtroom lore. In 1979, Wade served as counsel to Dr. Jeffrey McDonald in the much studied and discussed Green Beret Murder case. Most recently he was lead counsel for Collin Finnerty, one of three young men accused in the Duke Lacrosse Case.

To commemorate the body of work Wade has completed, the North Carolina Bar Association established in the spring of 2008 the annual Wade M. Smith award “for a Criminal Defense Attorney Who Exemplifies the Highest Ideals of the Profession.” In summer, 2008, the North Carolina Bar Association presented Wade with the H. Brent McKnight Renaissance Lawyer Award which annually goes to “an attorney whose trustworthiness, respectful and courteous treatment of all people, enthusiasm for intellectual achievement and commitment to excellence in work and service to the profession and community, inspires others.” In Summer, 2009, Wade was be honored along with other lawyers from across America by Best Lawyers in America for 25 years of succession for inclusion in their list. He has been listed in Best Lawyers in America since its inception in 1983. He has been selected to the North Carolina Super Lawyers Top 100 list since its inception in 2006, and has been frequently listed in their prestigious Top 10 list throughout the years. He has been selected to the Top 25 Raleigh Lawyers list by North Carolina Super Lawyers since it began in 2013. In 2016, Super Lawyers Magazine honored Mr. Smith, calling him “Our Atticus Finch” in their cover editorial.

Wade was born in 1937 in Albemarle, North Carolina. His mother and father were textile workers, having barely survived the Great Depression. Wade and his brother, Roger, were raised in a mill village called New Town. The family attended North Albemarle Baptist Church. Wade recalls that they went to church “every single time the doors opened.” In high school Wade was an All American football player with many opportunities to play on college football scholarships. But he chose, instead, an academic scholarship, The Morehead, at the University of North Carolina.

At UNC he excelled in academics and athletics, serving as one of the captains of the football team and winning many honors as an athlete. He was also awarded membership in the University’s highest honorary, The Golden Fleece. Wade has maintained his connection with the University, serving as President of the Alumni Association in 1985. In 1989 the University awarded him its Distinguished Service Medal.

After completing his undergraduate work and earning an A.B. in English, Wade attended the University of North Carolina School of Law, graduating in 1963. From 1963 to 1964 he was clerk to North Carolina Supreme Court Justice, Carlisle W. Higgins. After his year as a clerk, Wade joined friend and fellow law clerk, J. Harold Tharrington, to found the law firm Tharrington Smith. Justice Higgins was a mentor to Wade throughout his formative years as a lawyer and, after finishing his years on the North Carolina Supreme Court, Justice Higgins joined Tharrington Smith, remaining with the firm until his death in 1980. Wade counts among his most important mentors acclaimed defense lawyers, Robert L. McMillan, Jr., Carl Churchill and Joseph Cheshire V. But Wade says he has learned the most from his brother, Roger W. Smith, a renowned lawyer in his own right.

From 1964 to 1966 Wade was a prosecutor in Wake County Superior Court. He then began his work as a trial lawyer. During the ensuing years Wade has tried dozens of cases before juries in federal and state courts across North Carolina and other states.

Wade has been chosen for membership in many associations recognizing excellence in trial work. He enjoys fellowship in the American College of Trial Lawyers and in the American Board of Criminal Lawyers. He served as President of the Wake County Bar Association in 1988. In 1998 he was presented the Joseph Branch Professionalism Award by the Wake County Bar Association. In 2014 he received the Chief Justice’s Commission on Professionalism Award. In 2015, Wade was awarded the North Carolina Bar Association’s Judge John J. Parker Memorial Award, the state’s highest legal honor.

Wade’s work crosses many spectra, both civil and criminal. He has represented people and businesses great and small. Wade insists that there are no small cases. All cases which concern people are important to them, and therefore to him. He often represents businesses and business people in crisis during federal and state criminal investigations and trials. He has represented people from every walk of life and every kind of employment. He has worked in the areas of tax fraud, Medicaid and Medicare Fraud, health care fraud, environmental crimes and financial crimes.